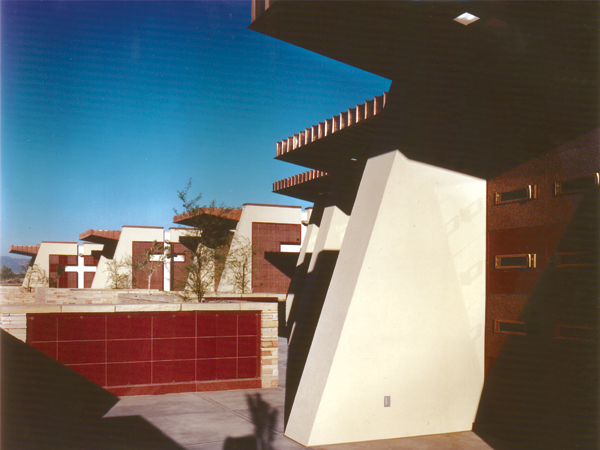 The Southwestern United States is usually defined as the four state area of Texas, New Mexico, Oklahoma, and Arizona. After Mexico was conquered by the Spanish in the early mid-1500s, their influence spread into Arizona. Permanent colonies began to develop and the Church began building missions near Indian villages to convert them to Christianity. In Arizona, the Jesuits built their first mission in the late 1600s. As part of the Church, paintings and sculptures of Christian themes were an integral part of communicating with the American Indians. Since language was a barrier, it was more effective to tell them about Christ through visual images.

To reflect this cultural heritage, the design of the garden mausoleum and columbarium complex at Holy Redeemer Cemetery, in Phoenix, AZ, utilizes visual images to convey the elements of the Church and Christianity. When Mekus Tanager was asked to design the 534 crypt and 2,600 niche garden complex, the architecture of the southwest played a key role as a unifying force in the development of this new cemetery.

This style of architecture utilized simple, quality materials native to the area. The garden crypt buildings utilize stucco, stone, and copper roofs. The overhangs of the crypt buildings roofs provide shade for the crypt fronts. The angled, buttressed walls impart a sense of strength and privacy for the adjacent crypt fronts. The Ramada, a Spanish term for an “open shelter that provides shade”, is comprised of native stone and wood and serves as a committal shelter. The low columbarium walls create a sense of enclosure and are made of native stone.

Each building was offset to create a sense of privacy for each crypt front elevation and to enhance the spiritual character of the complex. This created an opportunity to locate wall niches with crosses that are opposed to one another to form the courtyard. From the exterior, the importance of this complex is further strengthened by its location and proximity to the front gate and entrance road where the south-western design motif is at a focal point of the cemetery. 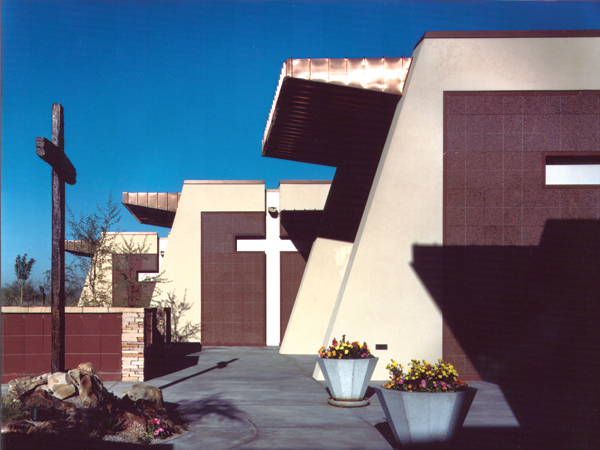 The final design was the result of input from many groups. It is a garden mausoleum and columbarium complex that not only complemented the existing plan for the neighborhood, but more importantly, developed a character that was sensitive to the image of the cemetery, respected the history and culture of the area, and preserved the natural desert landscape with xeriscaping.

The bronze cross, one of the main features of the complex, is there just as in earlier Spanish colonial days – as a visual image to remind everyone that the cemetery’s grounds are sacred and of the faith that binds those laid to rest there.

This article was published in American Cemetery, September 2007 Vol 79 No 9.

Mekus Tanager is a planning and design firm. For over 37 years, Mekus Tanager has been helping our clients turn their buildings and spaces into well-designed strategic assets that maximize aesthetic beauty, function and purpose, and return on investment. We are committed to listening to and working with our clients as a true partner throughout the design process.